Where does all the dust in Our solar system comes from? You might have heard of asteroids and comets, but the most spectacular source of dust in space are sungrazing comets, also called sungrazers.

These sungrazing comets approach the sun to less than 1.4 million kilometer and down to several thousand kilometers. On their way they experience extreme forces due to the high solar radiation. At the closest distance to the sun, the perihelion, the evaporation of comets material is the highest. However, the evaporation process already starts earlier and the comet forms a tail, the so-called coma. This tail contains the vapor of water or other volatiles as it boils of the surface of the comet but also a big fraction of dust.

These leftover cometary fragments are the main fraction of near Sun dust. The dust particles from the asteroid belts are not likely to reach the vicinity of the Sun, as they are ejected by radiation pressure as they approach the Sun.

The NASA/ESA SOHO is the prime tool finding this special type of comets. As the mission started in 1995 it has already captured more than 3000 sungrazing comets. With  comet Lovejoy and Comet Ison being the most spectacular ones. 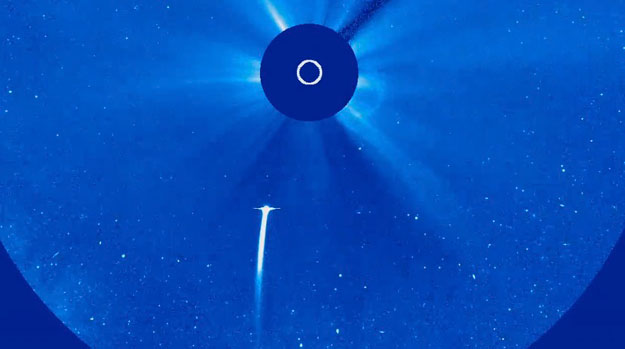 During a clear and dark sky, you are able to witness a phenomenon just after dusk or shortly before dawn. The Triangular light pattern in the night sky is caused by interplanetary dust particles. The tiny dust particles scatter the Sun's radiation into the direction of the Earth. This scattering mechanism causes this faint natural light phenomenon only seen during new moon and the least amount of artificial light.

The zodiacal light can be seen from the horizon upwards, just were the sun set below the horizon in the west or where the sun will rise in the morning in eastern direction. The bright column of light follows the ecliptic, which is the plane where all planets move around the Sun. The ecliptic is sometimes set into context with the Zodiac, the band of the famous astrological star formations along the celestial sphere. The zodiac is obviously also name origin of the zodiacal light.

Shape and Intensity of the Zodiacal light is a measure of dust number density and size distribution. Furthermore, for sensitive astronomical observation its intensity has to be very well, so that it can be subtracted from the of the observed star. 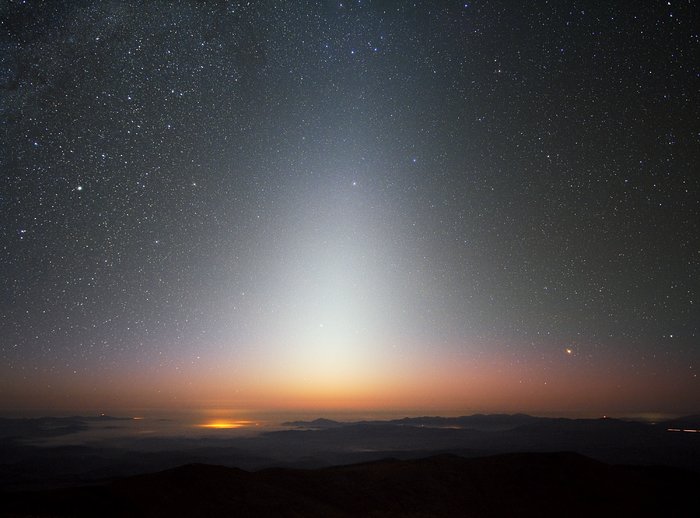 ESO has published a podcast on Zodiacal Light:

Meteors in the Earth's atmosphere

As a consequence of all that dust and tiny rocks in interplanetary Space, the Earth is constantly hit by those dust grains as it orbits the Sun. In fact, the Earth accumulates up to 100 tons of extraterrestrial material every single day. Millions of impacts occur and some of them are visible as shooting stars, also known as meteors.

However, the term meteor only describes the light phenomenon within the atmosphere. The rock flying through space is called meteoroid. The solid rock eventually survives its passage through the atmosphere and hits the Earth's surface, this rock is then called meteorite.

These tiny rocks reach pretty high speeds, their orbital speed lie between 10 and 70 km/s with respect to Earth. During entrance, the dust particle undergoes collisions With air molecules and heats up to 2000 K, at this point the dust grain start to evaporate. The hot vapor also emits light which can be seen with the naked eye.  The bright meteor phenomenon for sub-millimeter dust occurs around 90 km altitude, which is at the edge of space. However, the bigger rocks shine all along their way to the ground. 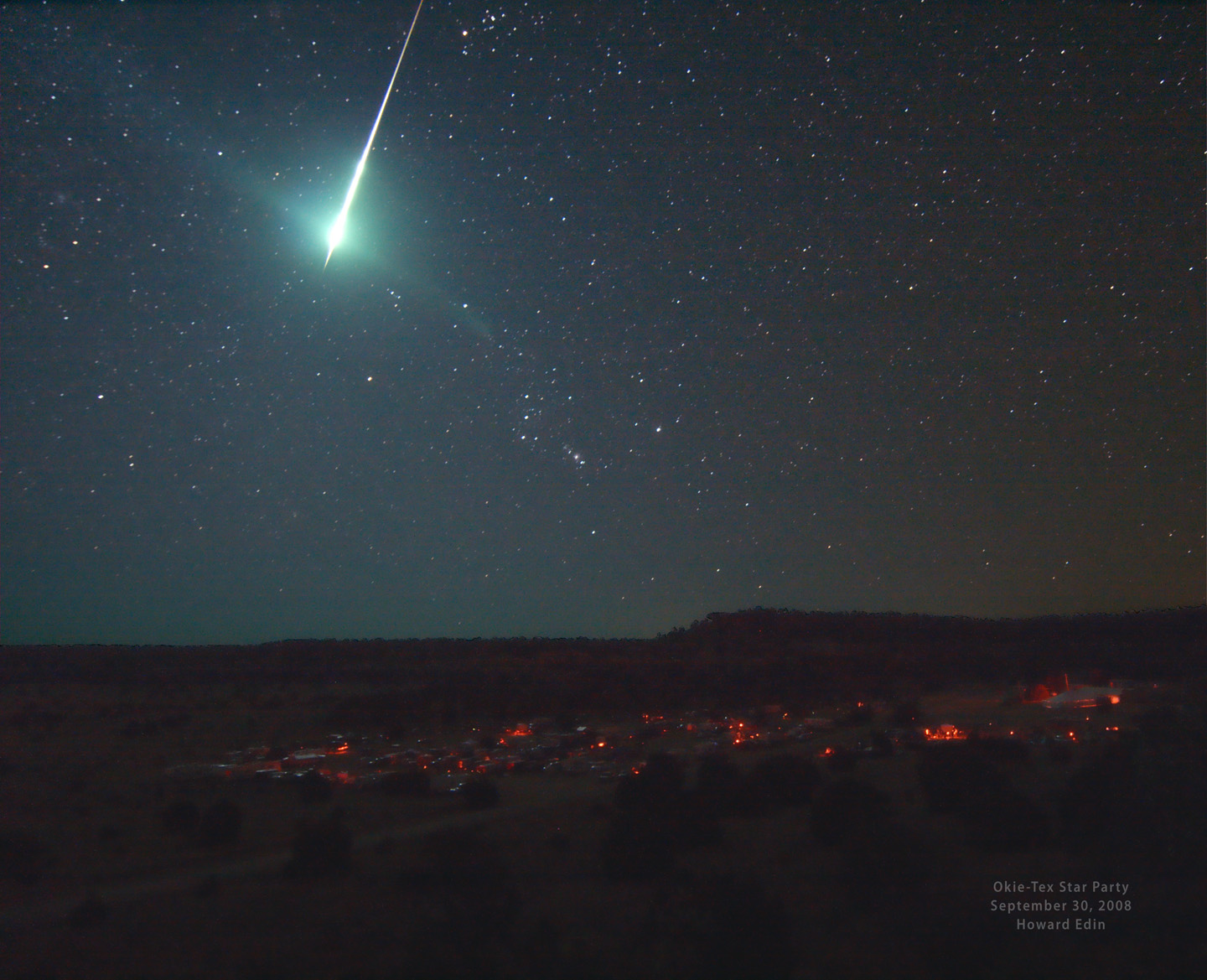 Have a look on YouTube: Meteors seen from everywhere, look for cars, airplanes or just a bench!

One example from NASA: The METEOR Experiment on the ISS looks down on us and films meteors: here!

As dust grains impact on the spacecraft body, they generate clouds of ions and electrons through a process known as impact ionization. They can also deposit charge by "rubbing" of electrons from the conducting surfaces of a spacecraft — a process which is not too different from what happens when you rub a balloon through your hair so that it can stick to the ceiling. The spacecraft itself can be charged due to the interaction with electrons, ions and photons from the sun. Thus, the amount of charge, or electric potential, it has before the dust impacts will dictate how the charged particles from the dust impact will be re-collected by the spacecraft. For instance, if the spacecraft is strongly negative, the re-collection of electrons will be slowed down. Spacecraft such as the Parker Solar Probe and Solar Orbiter carry instruments, namely antennae, which detect when the potential of the spacecraft or potential between antennae changes when a dust grain hits. The strength of the change is in simple terms related to how heavy and how fast the impacting dust grain is. The result is a short but strong increase (or decrease) or "bump" in the recorded potential. Below we show a typical signal which can be attributed to a dust grain hitting the Parker Solar probe: 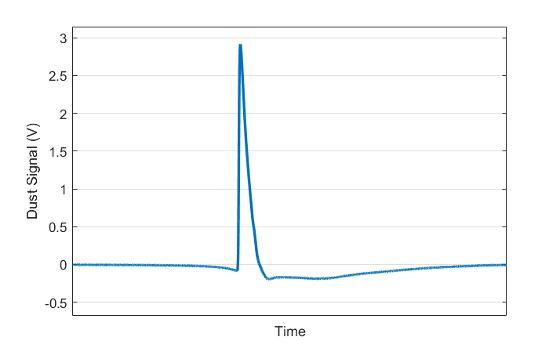