It is already the fifth time students of the Centre for peace studies visit Narvik War museum and participate in the game «Mission Z: One Last Chance»

A TRIP TO NARVIK -  by Richmond El-Nathan Sackey

Travelling on a bright morning in the company of some lovely folks is not just a great experience but an unfathomable moment of unending ecstatic inner joy.

We converged at the said foyer exactly the prescribed time. Everyone was present and ready to begin the expected experience. We have got to know each other pretty well during our 9month stay of continuous lectures, discussions, outings and get togethers. As we have come far to know each other, we form a world of divergent and complementary species disconcerted with the common goal of achieving peace.

On board was, thrilling Thembi, co-Piloting with Christian. Determined Dombo, was seated beside Katty Kat, obviously they would have more to talk about and maybe the days of endless debate could come to a standstill on this trip, but I wonder who will surrender.

Roxanna from Romania was seated quietly alone, and her pensive mood suggested that perhaps she was deciding on how to pass judgement on a complex case presented before her by the Romanian court.

Justice Julia was seated beside Capable Caleb and their moment of absolute silence was a big surprise, I figured it was a moment to use this portion of pedagogic Trip as a mini-vacation.

Right behind them was the emergent Couple, Andrea and Vermund, they have taken ample time of the conflictual crinkum-crankum of continuous classes to remain peaceful.

Aristocratic Aslam was coxing in tranquillity, well the peace wind blowing was strong enough to make you sleep or happy.

Interesting Ingvild, would sit beside no other person than merry Marisa, after all she was to find solace and relieve off the duty load of academia.

The serendipity of Seth was easily remarkable, he sailed in a such a cool composure.

Amidst the blowing peaceful wind of change Welobe the Worthy student could not be detached from the printed arithmetic of discombobulated academic arguments.

Granny Nina someway somehow still manage to capitalize on the serene atmosphere to talk about her grandchildren. I was seated by my favourite person in the class. I had succeeded in making her relax her brains just a little, whilst using her book to write my story.

It was halfway through the journey and I observed the mesmerising landscape, the rivers, mountains, trees and the Island of Troms with the blue skies as we drive up high. 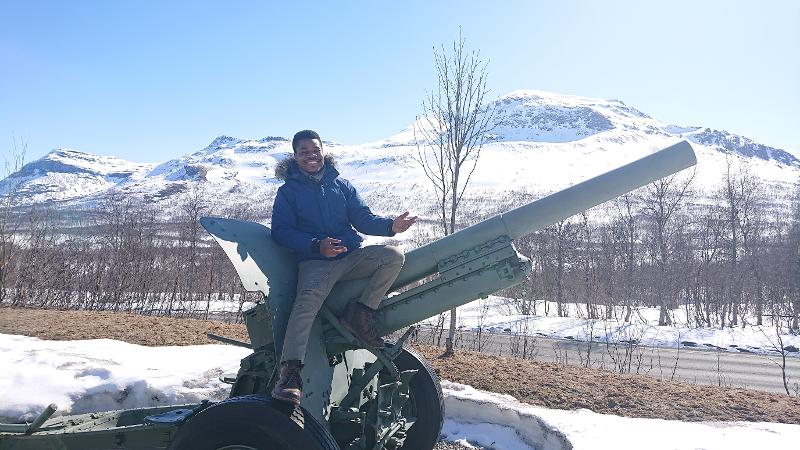 Rather unconsciously, we swiftly pulled through to Narvik. It seems we were following the programme keenly; we dropped our luggage and headed towards the Narvik peace Centre. Inside the museum, Ann Kristin, our tour guide began her task. As she kept speaking about what had happened during the world War 2, specifically noting dates and events occasionally pointing to the artefacts. The atmosphere was tense, and at a moment no one wished to speak except for the occasional questions people asked regarding the lecture, artefacts and documentary. I gracefully observed the artefacts and got soaked in the abundance of world war 2 history. Whiles we were about leaving the museum for the next activity, an inscription on the wall stroke me, and it reads “FROM ARMIES TO INDIVIDUALS: Today war is fought very differently than in the past. While Henri Dunant, the founder of the Red Cross, found thousands of wounded left to die after a battle in 1859, the armies of today do a lot to save anyone who gets injured. Do we value a human life higher today or it is because the cost of training a soldier is much higher?” this quote and the latter question filled up my brains until the Pizza arrived. We quickly rushed to the break room still within the centre and we devoured the pizza with soda, just refreshing ourselves from the bloody historic events we have heard, we didn’t just hear it, I taught within myself, we have experienced it too.

Now, it was time to begin mission z with Joakim. We were so eager to play that; everyone strived to understand and capture the rules and instructions of the game. In our various groups labelled with colours red, pink, green, blue and white each had several agendas we had to fulfil. It was a great and exciting moment of conquering territories and trying to prevent others from achieving their mission. As I watched how eager and committed each group was burnt on achieving their secret agendas and the music was heightening the suspense, I suspected there was something more to this game than just a mere win. But everyone wanted to win so bad that we ignored the essence of the game. Soon the 5th round came to an end, the entire game has ended abruptly.

Now, we had to reflect on the game and learn some lessons out of the game. There were numerous lessons to grab in the game than just to win the game. I realised that we were supposed to experience what happens in the real world by playing the game and nothing like a win. Marisa was right, she vented her spleen and expressed her displeasure. She said, “all these games are the same”. I attempted to console her, but I admitted she was right, we can be quick to judge situations in the world as peace scholars but just before our very eyes we all did fail in the game. I learnt a great lesson from this game and I’m sure everyone else did.

The following morning, we are all met exactly on time, Christian drove us smoothly and gave us the itinerary for the day. We picked-up our breakfast and our guide led us to Beisfjorden the 2nd world War prison camp. On arrival we silently absorbed another sad history regarding the prisoners, what caught my eyes was the statue that has been erupted by these prisoners as late as 1945 after the world war 2 in loving memory of the departed souls. We couldn’t  wait any longer and we sadly left the scene. 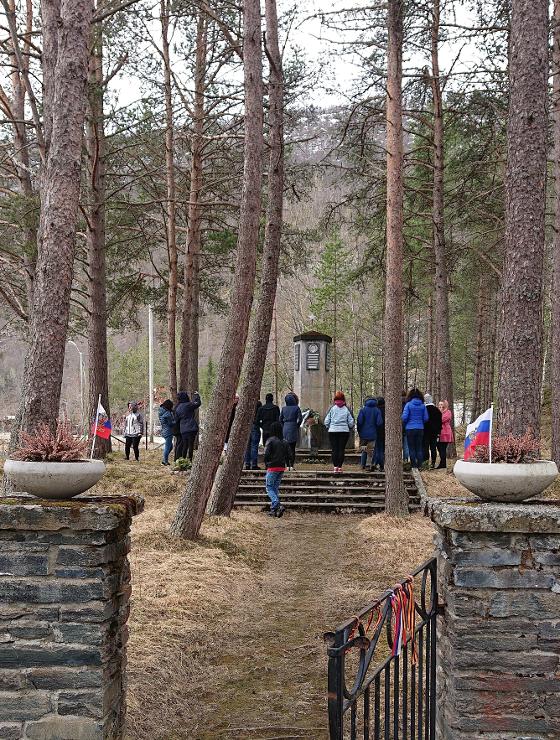 We continued the next face of our journey quietly, I stayed inactive until we arrived at Bardufosstun for lunch. The lunch was good, it revived us for our last activity. The protocol at the entrance at the Military camp didn’t take as long as I expected. We dashed into one of the rooms and received lectures from Jardar E. Gjørv. He had worked in the military for 39 years and his lectures reflected it perfectly, he gave us an outstanding presentation on the Norwegian defence staff. One comment that was still running through even to this point was the fact that Norway has arms production industries and yet they are regarded as a very peaceful country.

We left the military Camp at exactly 15:30, we needed exactly 2hours to get back to Tromsø. Christian did it marvellously, if not for some 15 minutes break on the road, we would have arrived exactly 17: 30 but we arrived just 10 minutes afterwards. Overall the lessons learnt on this trip was more practical and experiential, it gave us an appreciative understanding of theories we have learnt and what happens in the real world with regards to these theories. Yes, Narvik trip was awesome!!!!