In the High North, new access to rich natural resources creates a dissonance between a moral imperative to change the current economic behavior and the wish to profit from the economic possibilities of climate change. Citizens of the Arctic are challenged to define the future of their region by participating in decision-making processes at local, national and international levels. What role can we citizens play in creating an effective climate policy and action plan?

The Arctic Frontiers Side Event is a cooperaton between the University of the Arctic (UArctic) and a Norwegian research project titled “Climate Policy, Psychology and Indicators: How to induce behavior change to support GHG emission reduction policies”. Currently under development, it is led by the

The research group has applied for funding from the Norwegian Research Council (NRC).

The aim of the interdisciplinary project is to develop indicators for national climate policy that not only communicate and implement the need for the reduction of Greenhouse Gas emissions, but can also be understood by citizens as the right thing to do.

The project has a highly experimental approach in that it uses nudging and participatory research methods in order to develop possible solutions, and it will further explore the role of climate communication in creating societal change.

The Arctic Frontiers Side Event will introduce key elements of the project, formulate challenges related to human behavior in the face of climate change and present how the research group plans to approach them. We invite interested

to discuss the topic and its relevance for humans in the Arctic and give input to the project. A particular focus is given to the role of higher education and research in developing a climate for change in the region. 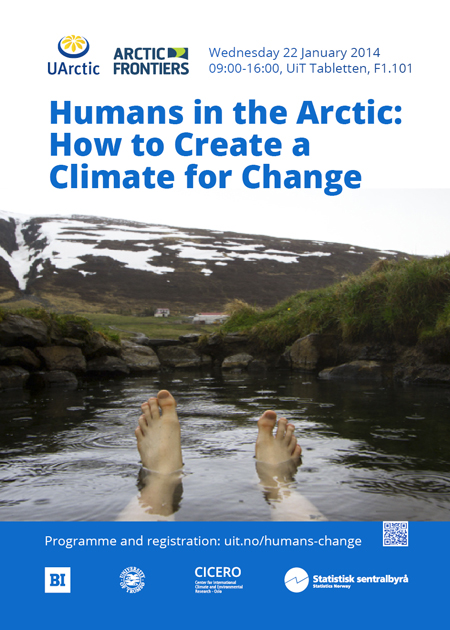